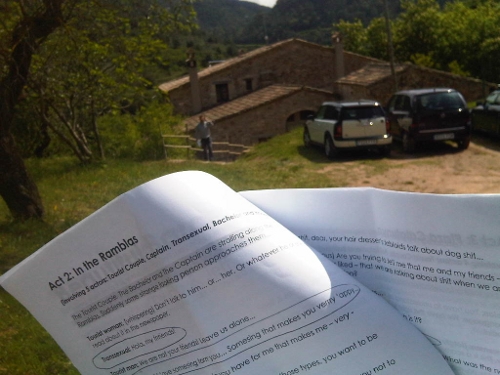 El Puig de la Balma is one of those XII century pearls of Spanish-Catalan rural tourism you will never hear about, and if you happen to discover it once you always want to come back.

On May 7 and 8 2010, El Puig de la Balma served as our second time venue for our Toastmasters Spring Retreat of the Barcelona clubs. In the end we were 19 people and, frankly, I think it’s been one of the best educational and entertaining experiences of my life – if not the best. I will share with you some lessons learned during this fantastic retreat…

Lesson 1: Be happy with those who attend

At any wedding, at any party, at any Toastmasters Spring Retreat there will always be those 10% last minute no-shows. You feel angry about it. You feel disappointed. Don’t – it seems to be a social rule. I recommend you take this into consideration from the beginning. Just subtract 10% of the total number of participants upfront and plan with those numbers. In the end, I always say it, it’s like at a wedding: be happy with those who attend and don’t think about those who didn’t show up.

Lesson 2: Split the group into subgroups

The highlight of our agenda was The Play (see below) which required us, from the start, to split the group into three subgroups of six. The entire event was embossed by a charming competition between these three groups. We did not only use them for The Play, but also for games. In terms of team-building it worked  wonderfully.

Jeff, my co-organizer brought up a great game. Everyone had to scribble two famous figures (fictional and non-fictional) on two pieces of paper. We then split into our three groups. The game consisted of three rounds.

First round: A member of a group had to describe the famous person mentioned on the piece of paper. S/he would have 30 seconds. Every correct guess by his/her team got them a point. After 30 seconds it was the next group’s turn. We continued until all papers were used.

Second round: Same as before, but now the person could only say one word, e.g. “Virgin” for Madonna or “Cheops” for Cleopatra.

Third round: Now the person in charge was only allowed to act.

It was a hilarious game. Everybody loved it because everyone had contributed to it by providing names of famous people. Involve your participants!

It’s easy to say that when you have found such a historical treasure as we have. But in general it’s true. The success of your event depends a lot on the choice of your venue. We all are used to city life. After having done this two times now in two different rural locations, I would always go for that option. Far away from any civilization people are forced to stick together. But they love it! It’s an escape from our everyday life. We need this once in a while. Don’t start looking for city venues – go for nature, go back to the roots! In every group of people there is at least one Karaoke fan. In our case he is called Kai. It started on Friday night at 1am and lasted till 4am. Everyone sang, everyone was involved, everyone had so much fun. By the time “My Way” concluded the session after “We are the Champions” had boiled our emotions, we all agreed that Karaoke is king!

Lesson 6: People want to learn something

Our retreat was – above all – a fun activity. Nevertheless, people love to learn something new. It makes them feel that they invested their free time well. In our case we had two educational sessions. Using a topic that everyone can relate to I showed them how to create a wedding speech in just a couple of minutes. You can learn more about the methodology which applies to literally any speech topic inThe Seven Minute Star, “Step 8: No Parthenon”. Jo Ann from Jamaica gave us an incredible educational lecture providing 8 tips on how to master the Cold Call. We didn’t pass out feedback forms evaluating the retreat, but I’m sure the educational sessions would have ranked at a top position. People love to learn something new.

Lesson 7: The best team-building ever

During a KPMG summer retreat we once had to create a dance choreography in groups of 12. The dance was to be performed by the end of the day. Nobody told us when to practice and how to practice. But in the end we acted as one team and performed a hell of a dance!

For our retreat I borrowed the methodology, but changed the subject. We are public speakers, and public speakers are very close to acting in several ways. I decided to write a script for a short play. Jeff, my co-organizer, liked the idea a lot and contributed to it once the play had been drafted.

The 10-minute play called “Beautiful Barcelona” had 4 acts/scenes and featured 11 characters – The Tourist Couple, The Captain, The Bachelor, The Transsexual, The Hooker, The Politician, The Butifarra, The Waiter, The Barça Player, and The Ghost of Gaudí.

During Friday night’s dinner each participant received the script including instructions and a description of the cast characters. From that moment on our three groups acted as robust entities. When the groups finally perfomed the play 20 hours later it was palpable that this must have been one of the best team-buidlings ever.

Better is the enemy of good

Voltaire had a point there; it will be hard to create an even better Spring Retreat next year. But it doesn’t matter. At Toastmasters we always try to give the best we can and everyone acknowledges it. This positive spirit is what I love most about our great organization. We had a fantastic time in El Puig de la Balma and Tomás, the owner, is happy that we will return in 2011 to have yet another fantastic Spring Retreat far away from civilization.