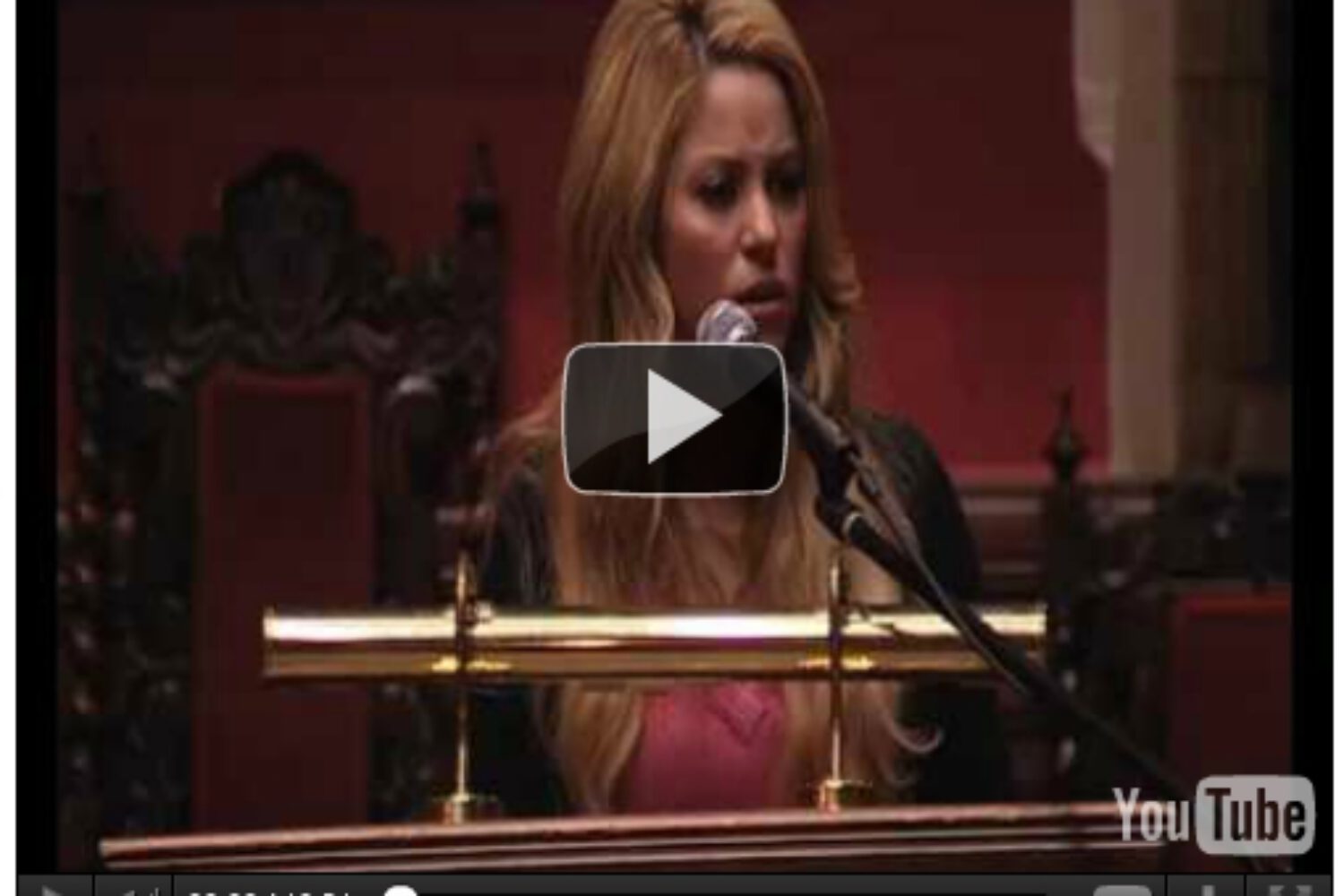 On December 7 2009, Shakira spoke about the work of her charity, Barefoot Foundation, at Oxford University’s world-famous Oxford Union.

I am a great, great fan of this speech, so I share with you some of Shakira’s rhetorical highlights from my point of view.

It is truly an honor and a privilege to be here today and that you have afforded me this opportunity to speak to you.

I must confess, I am somewhat mystified as to why you are here. I won’t be singing… and there won’t be any hipshaking whatsoever.

So, how do I, a girl from Barranquilla, Colombia come to occupy the same stage as Newton and Churchill? Lord knows I’m no Mother Teresa… But here I am, nonetheless.

Shakira makes fun of herself in a humble, but also sophisticated way. What sticks is the message, Newton, Churchill, Mother Teresa, Shakira, … Self-depreciation, in general, is a wonderful driver of humor in your spech.

The opening of Shakira could have been even more powerful, if she had started with mentioning the names first… “Newton, Churchill, a girl from Barranquilla, Colombia. How come I occupy the same stage…” – Then she could have continued with her thank you/honor stuff – AFTER the surprising first paragraph. Don’t waste one single syllable of impact in your first sentence!

And I realize that the one point of view from which I can depart is that of an artist. After all, it is who I am, right? We artists depend on our imaginations.

When I first learned I was coming, I thought about the past and I imagined the future. From your minds ideas will sprout that will give new shape to the world. And I cannot help but fast-forward to what the world will be like in 50 years. What will be happening? Who will we be? What challenges can we overcome? How will we live?

I have a fantasy about this future that I wanted to share it with you today.

Message of credibility: I am an artist with imagination which puts me in the right position to talk to you. She also builds a bridge of sympathy by saying “From your minds ideas will sprout that will give new shape to the world” and Shakira engages her audience by asking visionary questions that all of them might have on their minds.

Let me put it this way, if civilization were a car, we would have been cruising at 20 miles per hour for millions of years only to hit light speed in the last hundred.

So I wonder, what made us accelerate so quickly recently and how can we continue this pace? There is only one explanation to me, and that is the democratization of education.

Magnificent Methaphor: civilization is a car. This makes the message sticky and easy to understand.

I strongly believe that the best is yet to come, with universal access to education to feed our collective intelligence, with our commitment to meet and organize in places like this with students like you – we could be so close to creating a network of intellect, an enormous think tank devoted to sharing the best ideas and inspiring each other to keep learning, keep informing, and keep advancing our world. And finding solutions to our common issues. Wouldn’t that be great?

Shakira looks for buy-in. She prepares it by making her audience feel important – “network of intellect”, “enormous think tank”. She ends this paragraph using a rhetorical question that only knows one answer: “YES!”

We have evolved so far in the course of human history, with so many technological advances in just the past century.  So how will we evolve in the next ten tears, or twenty years, or fifty years – now that we know that the world has shrunk and to me it has practically become just one big neighborhood.

Great metaphor: The world is one big neighborhood. Generally, we all care more for neighbors than for strangers living on another continent.

You are the architects of change. So tell me, how many things that seem inconceivable today will be obvious tomorrow? How long will man live? How will society be structured? Will we still be organized in couples? In communities? Governed by governments…

“You are the arquitects of change.” For me the key sentence of the speech. At his stage Shakira bought the last wo/man standing in her prestigious audience. Now she has them eating out of her hand…

Sadly, at the current pace of change, we won’t have universal access to education in a hundred years, let alone five. That is unacceptable.

Especially, when the world has the resources to feed itself several times over, then, why are children starving? Latin America alone has 3 times the necessary abundance to feed its entire population.

Great fact – it gives more weight to her message.

These children can’t. They can’t wait a hundred more years.

They need us to cure a child with Leukemia or AIDS with a simple pill or a breakthrough vaccine. We need to live in a world in which together we can find a solution to global warming so we don’t have to worry every single time a storm begins to form on the horizon. We need to find new ways to distribute food so no child goes to bed hungry.

Again Shakira makes messages tangible for everyone. Instead of saying “starving children” Shakira talks about children who go to bed hungry. Everyone in the audience knows THAT feeling. It is a feeling much closer to her audience than a Purlitzer Prize winning photo of a starving kid in Dafur.

And I know that education is our ticket. How do I know? Because I’ve seen it.

I was born and raised in Colombia – a country marked by civil conflict, social strife and inequality. Growing up in the developing world, where education is perceived as a luxury and not as right; where children beg for an education and parents are desperate to provide it; where if one is born poor, one is destined to die poor.

A Porsche is luxury. A penthouse on 5th Ave is luxury. But education? Exactly – think about it! Born poor, destined to die poor – the tragedy of a life-time in just six words – priceless!

But the good news is that there is an exit strategy to break the cycle of poverty in which millions are trapped because of lack of access to education. From the moment I turned 18, I decided to establish my own foundation in Colombia. And since then we have been working on providing high quality education, nutrition for children and occupational training for their parents, building schools that also work as community centers for families that have been displaced by violence that have lost everything they had.

Smart statement! There is an exit strategy: my foundation! 😉

We found the way to keep kids in school and maintain parents’ involvement in their children’s education. By providing nutritious meals in schools we have decreased the number of dropouts and we have eradicated malnutrition among our students.

So we know that creating comprehensive models of education in areas where the population is vulnerable to extreme poverty and conflict, transforms the minds by not only children but entire communities. And it works. Believe me, it works.

Proof of concept! Shakira turns an intangible concept into a successful project.

Now I want to be clear about this, this isn’t about charity. This is about investing in human potential. From an ethical point of view, from a moral point of view, it accomplishes a purpose. But also from an economic point of view, this could bring enormous benefits to all mankind. Universal education is the key to global security and economic growth.

Another fantastic statement. Shakira differentiates herself from “normal” charities – stating ethical, moral, and – also – economical drivers. She even manages to address those business students in the audience. Is there anyone left in that room who is not fully engaged by now?

We all want safer nations.

Smart formulating of a mutual goal. Shakira and the audience merge into one team of change.

And in a world where weak states are often a haven for violent extremists, getting more children into school can dramatically help reduce the risk of instability and lay the groundwork for more stable democratic political systems to emerge. A child who lives in extreme poverty away from school is 10 times more likely to be recruited by a militant group then one who is receiving an education. For instance, in Colombia we have kids in our schools who were destined to be a part of the drug trafficking business or recruited by guerrillas. However, today, as we speak they are going to college and like you, are graduating soon. So yes, education promotes peace and stability worldwide.

One single year of primary education invested means a 10 to 20% increase in wages in their adult life. Amd for every dollar invested in early childhood development programs, that same child will give back $17. So yeah, education also boosts economic growth.

More tangible numbers and statistics to support her emotional message with rational facts.

That is how I want the youth of 2060 to see us. That our mission for global peace consisted of sending 30,000 educators to Afghanistan, not 30,000 soldiers. That in 2010, world education became more important than world domination.

A great vision seen from the eyes of future generations. This is much more powerful than saying “My vision is…”. The youth of 2060 are our grandchildren – everyone in the audience is automatically emotionally attached to this message.

Because only education will accelerate our evolution.

She closes the circle by going back to the beginning – perfect!

Because only by investing in our children, by tapping their potential that has remained untapped for too long, can they one day cure our diseases, or bring us to Mars, or secure us peace here on earth.

What a call for action supported by a great quote by one of them! How can one top that?

And please, step on it.

Now – Shakira, to make your perfect speech even more perfect, this is exactly the moment you should have stopped. Use an engaging hand movement to show the stepping on it, look into their eyes with an engaging smile and say no “thank you”… Let them thank YOU and let the last message vibrate in the room!

Thank you so much. This has been a true honor.”