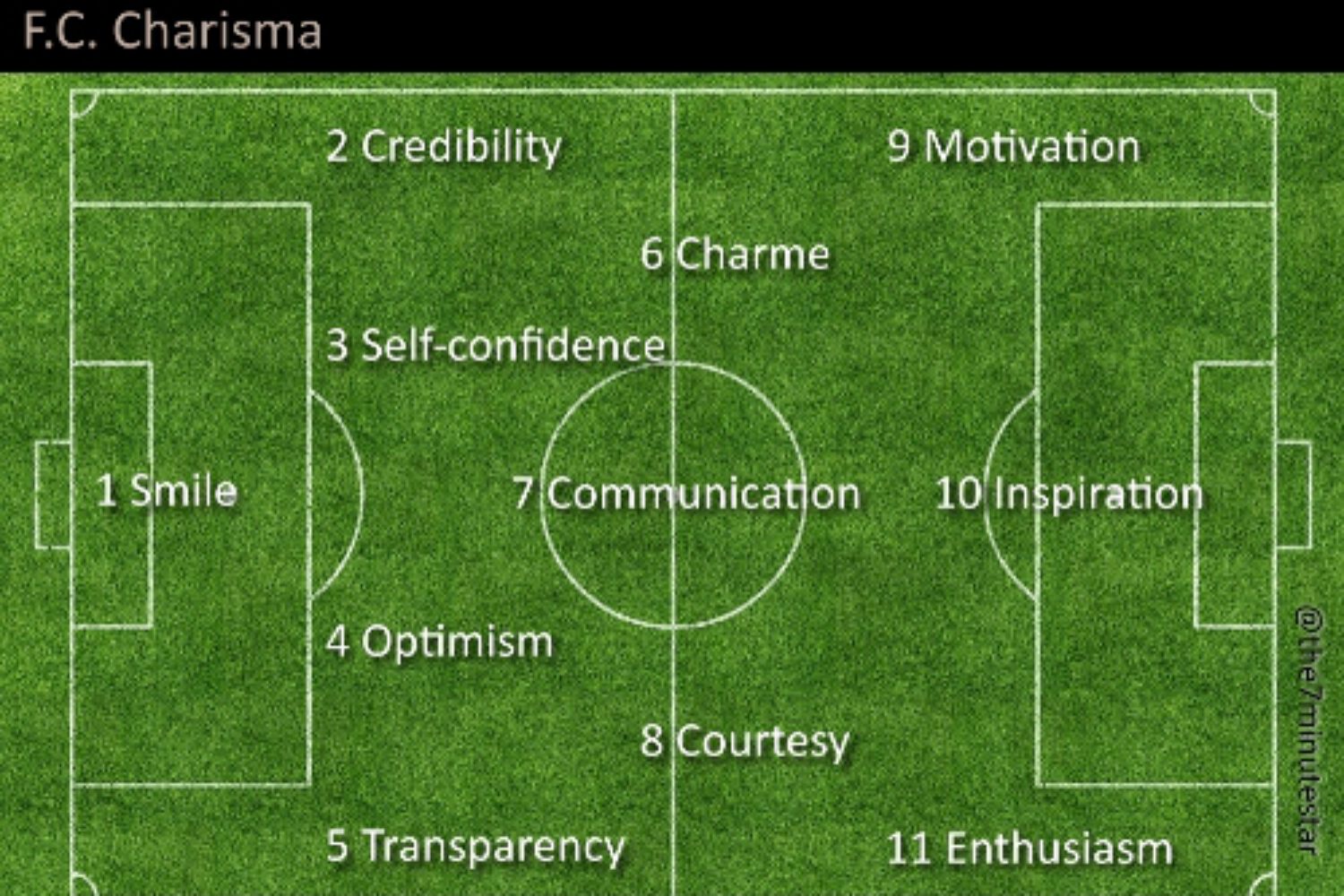 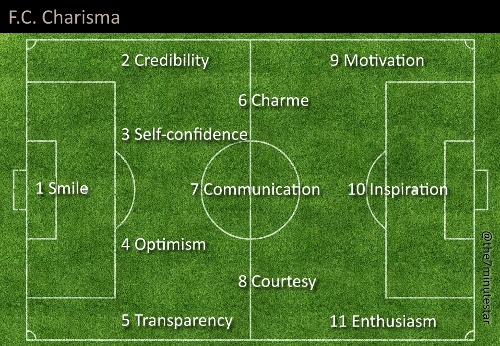 F.C. Charisma proves the power of personality every year. Goalkeeper, defense, midfield, strikers – altogether they make up a mighty mix of personality.

Who are these fabulous players of this fabulous team?

Smile, the goalie. Smile puts an end to literally any attack. They call him “The Wall”. When all defense have been sacked by the opponents, Smile is there to prevent more trouble. Smile is a giant. Smile never fails. Smile always wins.

Self-confidence is the best central defender of the League of Personality. When other teams or the press try to put him down, Self-confidence believes in his own strengths. For other strikers it is almost impossible to pass him. Self-confidence holds the League’s record of duels won.

The team may be losing 1:3 in the 79th minute – Optimism will say that they still can make it. Optimism never gives up, he never sees the shadow. Optimism sees the light at the end of the tunnel when all other team-mates have given up already. Optimism is the perfect tag team partner of Self-confidence in the central defense.

Transparency is the alpha dog of the team. He always says what’s on his mind, he never minces matters. What others think about him? He couldn’t care less. Transparency openly talks about his feelings, his emotions, his anger, his weaknesses, his dreams, his joy. He is the soul of the team. With his aggressive openness Transparency drives his opponents nuts.

Charme is so charming. What a gentleman. What a guy. Charme is the George Clooney of the team. He constantly spits out compliments at all staff. Sometimes he gives a bunch of flowers or a box of chocolate to Thelma and Louise, the cleaning ladies of the club. Charme is the best body of Smile, the goalie. When the two of them hit the club scene, ladies, you better be careful…

The game maker. The center of the game. A former player of F.C. Rhetoric, Communication just always finds the right words. Referees love him, opponents hate him. The power of Communication’s words is the motor of the team’s personality. For years the passionate reader of Manner of Speaking and The Rhetorical Journey has managed to hide his most secret source of inspiring communication…

Courtesy, a player of French origin always runs the extra mile for his team-mates. Coutesy always wants to help. He is also famous for his gentle politeness and courtly manners. When the team dine out with their partners, Courtesy keeps the door open for the ladies. He is the last man standing when the last lady sits down. His always helpful attitude and style make Courtesy one of the most favorite players of the team – even if he nags about his colleagues’ elbows on the table during lunch.

The attitude of his team-mate Optimism – Motivation translates it into action. He drives the others crazy quoting Voltaire all the time, “Better is the enemy of good.” Motivation always strives for more and he knows how to light the fire in the rest of the team. “You are great, but you can be even greater!” Motivation is the Tony Robbins of F.C. Charisma. “Faster, tougher, stronger – you can do it!” The tattoo on his chest reads I am the enemy of good.

Inspiration is the top scorer of the League of Personality. He inspires the absolute will of victory into his comrades. Once during a break he stood up and gave a historical speech. “Credibility, alone you are nothing. Charme, alone you are powerless. Every single one of us is worth less than a sandglass in the desert. Together – we are everything! Together – we are powerful! Together we are Charisma – feared, loved, admired! Together we will go out there now. Together – as one team – we will make them feel the power of Charisma!” They won 5:2.

The clown of the team – Enthusiasm. His loud voice moves everyone. His contagious laughter makes everyone smile. With his lively way Enthusiasm engages everyone. He is so agile, the other defenders end up with knots in their knees. Enthusiasm throws around his arms and legs even if he explains the simplest thing. He throws sparkles of excitement even into the most boring moments of team togetherness. Enthusiasm – an amazing player, an amazing guy.

Yet, a winning team needs more than 11 players. 11 players win a game, but it’s the bench that wins the league.

On the bench of F.C. Charisma you find four more superstars: Engagement, Spontaneity, Sexiness, and Wit.

How can you beat such a powerful team of personality?