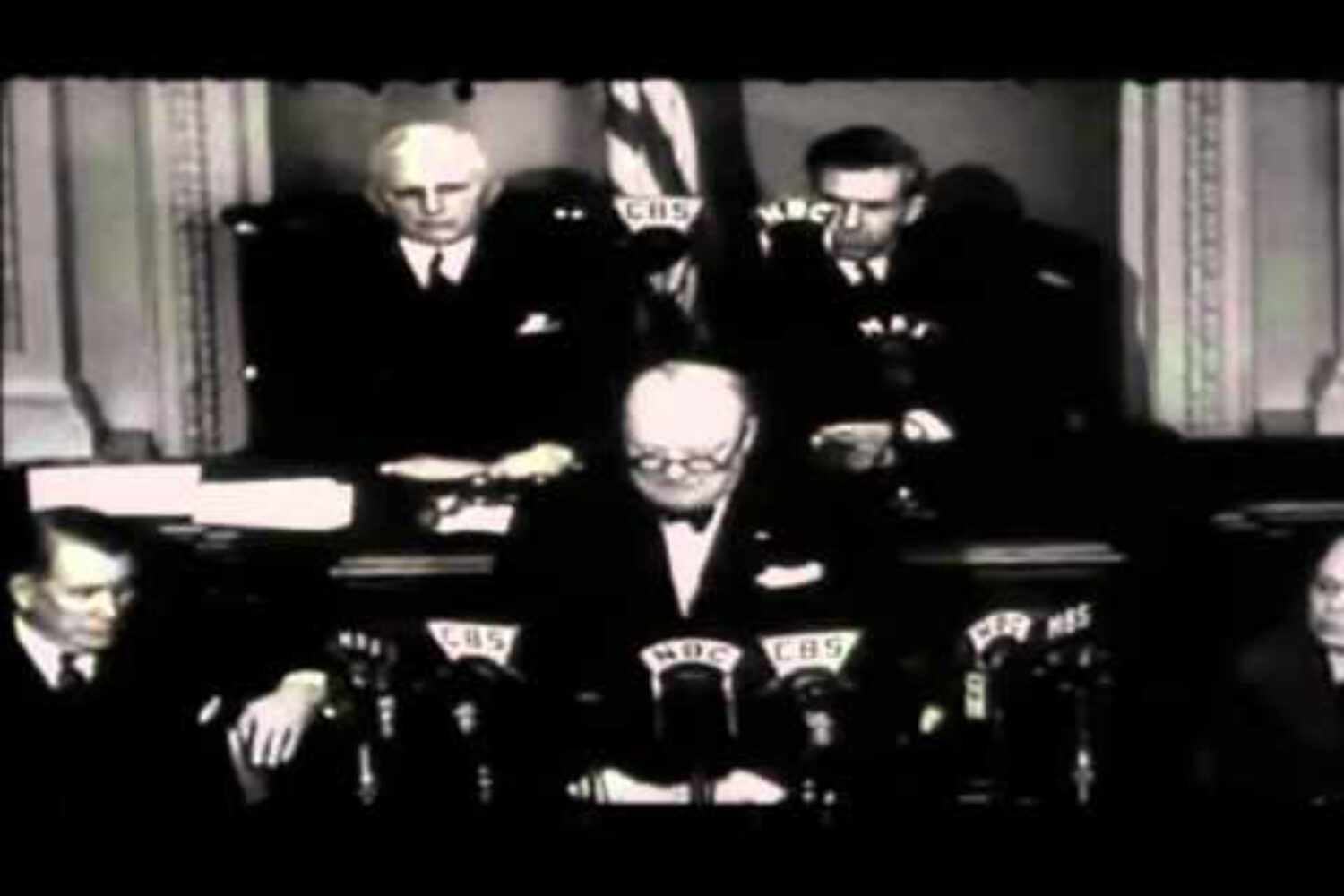 In December 1941, after the attack on Pearl Harbor, the British Prime Minister Winston S. Churchill traveled to the US to deliver a compelling wartime message to the American government.

I love this (shortened version of the original) speech a lot. It offers many learnings – in content and delivery, in passion and enthusiasm, in rhetoric and vocal variety.

Enjoy this fantastic speech, the original script, and my subjective comments.

“The fact that my American forebears have for so many generations played their part in the life of the United States, and that here I am, an Englishman, welcomed in your midst, makes this experience one of the most moving and thrilling in my life, which is already long and has not been entirely uneventful. I wish indeed that my mother, whose memory I cherish across the vale of years, could have been here to see. By the way, I cannot help reflecting that if my father had been American and my mother British, instead of the other way round, I might have got here on my own.

In his opening Churchill flanks any potential prejudice among his American audience by stating that he is half American himself. Combined with his value of sincerity – “I am an Englishman” – and fueled by emotions – “moving and thrilling experience” plus talking about his mother – Churchill builds up his already perceived level of ethos (authority and credibility as a speaker). He then adds self-ironic humor. Ethos, emotions, entertainment – what a beginning! The audience is well prepared now.

Sure I am that this day – now we are the masters of our fate; that the task which has been set us is not above our strength; that its pangs and toils are not beyond our endurance. As long as we have faith in our cause and an unconquerable will-power, salvation will not be denied us. In the words of the Psalmist, ‘He shall not be afraid of evil tidings; his heart is fixed, trusting in the Lord.’ Not all the tidings will be evil.

The key punchline, “We are the masters of our fate”, is one of the jewels of modern rhetoric. The “We” builds a team of Empire and USA. The “masters” puts both powers in the same league of excellence. The “fate” defines a higher goal. Churchill backs the punchline by pathos and a Psalmist quote. The latter probably targets the religiously conservative Senators and Representatives among his audience.

On the contrary, mighty strokes of war have already been dealt against the enemy; the glorious defence of their native soil by the Russian armies and people… Wounds have been inflicted upon the Nazi tyranny and system which have bitten deep, and will fester and inflame not only in the Nazi body but in the Nazi mind. The boastful Mussolini has crumbled already. He is now but a lackey and a serf, the merest utensil of his master’s will.

More pathos highlighting “the glorious defence” of Russia; subtly saying that if they can do it, “we” can do it too. Churchill makes the degeneration of the Nazi terror tangible by using the rhetorical device of personification: “Wounds have bitten deep…”  – I love Churchill’s acting voice when he speaks about “the boastful Mussolini”. The following sentence is a death sentence for Mussolini’s exuberant self-esteem (and Churchill knows very well that the “Duce” will hear this speech).

Many people have been astonished that Japan should in a single day have plunged into war against the United States and the British Empire. What kind of a people do they think we are? Is it possible they do not realise that we shall never cease to persevere against them until they have been taught a lesson which they and the world will never forget?

“A lesson which they and the world will never forget” is a perfect example of Vox Populi – hitting the tone of the people. This is exactly the sort of alpha dog statement that Americans love to hear. By hitting their tone, Sir Winston Churchill becomes one of them.

Here we are together facing a group of mighty foes who seek our ruin; here we are together defending all that to free men is dear. Twice in a single generation the catastrophe of world war has fallen upon us; twice in our lifetime has the long arm of fate reached out across the ocean to bring the United States into the forefront of the battle. If we had kept together after the last War, if we had taken common measures for our safety, this renewal of the curse need never have fallen upon us. Do we not owe it to ourselves, to our children, to tormented mankind, to make sure that these catastrophes do not engulf us for the third time?

Now – after having schmoozed his audience with ethos, emotions, entertainment; after having set a higher goal; after having despised the mutual enemies; after having talked to them in their language; now – Churchill unleashes his truly inspiring message. With his monumental rhetorical question he  leaves no trace of uncertainty that from now on the question of peace on earth will be a question of English-speaking togetherness. It’s probably one of the most powerful paragraphs of teambuilding in modern history.

It is not given to us to peer into the mysteries of the future. Still, I avow my hope and faith, sure and inviolate, that in the days to come the British and American peoples will for their own safety and for the good of all walk together in majesty, in justice and in peace.”

Finally, the absolute leadership message. Realistic, but convinced Churchill points out that not only must they walk together, but that they can – in “majesty” (the Empire), in “justice” (USA) “and in peace” (together). A+B=C. A priceless last sentence.