Not many bands in the world can boast to be loved by its majority. U2 is one of them. I know it. For sure. I use Spotify during my seminar breaks. One band never fails – U2. One, With Or Without You, Beautiful Day – it’s a success. Given.

Having said that, it would be pretentious to say that I’m impartial when it comes to analyzing a speech given by Bono. I saw him live. I love his voice, I love their music, I love U2.

Nevertheless, it wasn’t my sympathy for the Irish lead singer that made me analyze Bono’s latest TED talk. It was my friend Trent zum Mallen, the ever-active social activist. Trent likes this specific TED talk a lot. He asked me to give him my opinion.

So, Trent, this is for you.

Aristotle taught us to build three pillars, if we want to create a temple of persuasion. In his talk Bono builds all three of them. He offers logical arguments (logos), he conveys credibility and authority (ethos), he appeals to our emotions (pathos).

What is it that Bono does particularly well in this speech?

Bono offers a vision. He mentions a date, which sounds reasonable. 2030. Destructing extreme poverty by the year 2030 sounds doable. It can be done. And… most of the people in his audience will be alive when we reach the year 2030. It’s a relevant vision for his audience.

Many speakers fail when it comes to giving concrete examples. They keep it generic. Bono doesn’t. At one point he talks about social media activists with smart phones in their hands fighting corruption in Uganda. This is what I call a specific example. Specific examples connect with your audience much more than any generic term could ever do. Another example of examples is the $1.25 per day survival amount. Great examples.

Whenever participants in my public speaking seminars use dialogs during their speeches group feedback is positive. Dialogs spice up your speeches. Speakers change their facial expressions, their voice, their pitch. When Bono relives that dialog between the Pharaoh and the Sheppard he turns into an actor without being an actor. Dialogs are a great tool for audience attention.

No memorable speech without humor. Humor is all about patterns. Bono uses three of them:

Bono starts with humor – a great way to start a speech. 25 years in 10 minutes – that IS succinct. The fact that Bono adds the English-Irish tonality makes it self-ironic, hence humorous. The audience laughs.

The inner nerd in me. A great phrase, because no one in his audience would expect a global rock star to say that. The audience laughs.

The Jesus comparison. Making fun of his own preaching manner is – for me – the killer phrase. Even if you don’t dig Bono, that is the point when you challenge your own conviction. The audience laughs. Of course.

When Bono enters the erogenous zone and says that the data makes him feel sexually aroused I fell off my chair. Maybe it’s me because he hit my personal nerve of humor so hard, but exaggeration IS a great pattern of humor. Exaggerate sometimes and often!

3) Fall of the Alpha Dog

I wrote about it. I preach it. Thank you, Bono, for making the Alpha Dogs of the global music industry fall so well. When he speaks about the cost equivalent of what it takes to make the destruction of extreme poverty happen, Bono says that, This is the value of three farewell concerts of the Rolling Stones. The Rolling Stones ARE the Alpha Dogs of music. Bono lets them fall – kindly, creatively, intellectually. And? The audience laughs. Of course.

1) Ethos, credibility – one of three pillars of persuasion.

Bono is a smart man. He knows that his audience perceives him – apart from his musical curriculum – as a social activist. But, genius struck him when he didn’t stop there. No, what he does is, he creates a neologism. A new expression – factivist.  Doing so, he turns into a non-attackable species of expert. Very smart. Well done, Bono.

2) Logos, argument – another pillar of persuasion.

Who said that data is boring? Watch Bono’s talk, watch Hans Rosling’s talks – it’s all about creativity. I love Bono’s visualizations. He must’ve had great support on that side. They’re fantastic! Rethink your slides.

3) Pathos, emotion – the third and last pillar of persuasion.

Bono gives people names. The names of the children, for instance. Names are more personal. Bono tells their moving story of survival. He also tells the story of that activist. We’re going to win! A story that gives me goosebumps. Whether it’s the destruction of extreme poverty or a business unit presentation – always appeal to the emotions of your audience.

Bono says that, Facts want to be free. Turning facts into humans and building a bridge to the number one value of humanity, freedom, is brilliant. The only one singing today is facts. Another personification – singing facts. Bono even combines it with a trace of self-deprecation.

Facts… Facts… Facts…  – the repetition of parts of the beginning of your key phrases makes your message more memorable. The Greeks used anaphora, Bono uses anaphora. Do you use anaphora? (By the way, this reversed form of anaphora is called Epistrophe.)

[…] that the wealth under the ground ends up in the hands of those above. I love this phrase. To use parts of the whole – like hands instead of people – is called synecdoche.

We can remember images much better than words. Metaphors like Transparency is daylight or I have the words tattooed in my brain address our visual sense. Bono could’ve said Transparency is important and I remember those words. The impact would’ve been much lower.

The strongest phrase of Bono’s speech is his last phrase: The power of the people is much stronger than the people in power. Chiasmus, the rhetorical device of reversed repetition, is a usual suspect of great rhetoric. Do you remember JFK’s immortal lines? Ask not what your country can do for you; ask what you can do for your country. Well done, Bono. 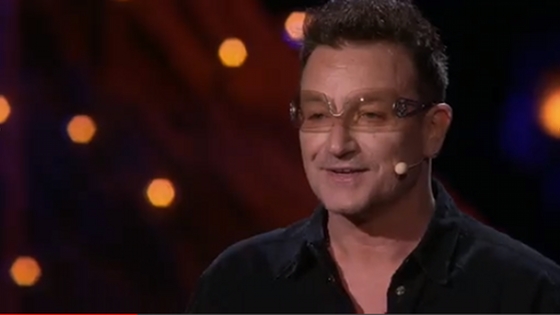 Bono also does a good job on the delivery side.

An example for good gestures is when Bono turns the pyramids upside down.

Another aspect of voice in public speaking is coherence. Coherence between content and voice is a driver of authenticity. The topic is poverty. The content is based on facts and figures, mostly. Bono uses a calm tone, which corresponds with the subject. Not exaggerated, not wild, but humble.

You transmit enthusiasm through your voice and body. When Bono celebrates the predicted achievements of fighting extreme poverty, he shouts out the onomatopoeic word WOW three times. For me, that is a great moment of enthusiasm. Look at Bono when he says WOW. That is what I call enthusiasm.

A highlight of Bono’s speech is the use of his shades when he symbolizes the shift from the rock star to his inner nerd. Apart from the creative way of turning the shades upside down, the act has even more impact because of the perceived demonstration of vulnerability. His shades are Bono’s trademark. By taking them off in public, he connects with his audience. It’s a sympathetic act. Well done, Bono.

Considering all the goodies of his speech, is there something that Bono could’ve done even better?

When Bono says that we have a different book in Egypt today, he expects audience laughter. He expects laughter after he says, “The Facebook”. The audience doesn’t respond. Normally, saying the unexpected is a pattern of humor. Example: Veni, vidi, and I lost. But Bono’s TED audience doesn’t laugh.

I think they don’t laugh for two reasons. Every word counts in public speaking. Bono refers to Facebook as The Facebook, its original name. It’s like calling McDonald’s The McDonald’s. It’s not quite right. An audience senses these details. Secondly, the humorous pattern of saying the unexpected requires that it’s actually… unexpected. But with all the media attention that this social media-driven revolution had gained, it’s obvious what he’ll say. Not unexpected? No laughter.

At one point of his speech Bono says: “I know that some of you think…” As public speakers we never know anything. We love to assume and all assumptions are false. We will always face people in our audience who object to our assumption. Bono did it 50% right. He refers to some of them, not all. Still, I reckon you avoid general assumptions. An easy way to avoid trouble is to ask questions. “Who of you think that…?” Then, and only then you’ll always be on the safe side.

I love connecting the beginning with the end of a speech. I call it the drainpipe – a wonderful way to make your speeches round. Bono starts his speech with a humorous reference to a dialog with TED maker Chris. Yet, I would’ve said one more phrase before that. I would’ve started the speech saying, “What is stronger? [pause] The power of the people or the people in power? After a long pause I would’ve continued with the TED Chris anecdote.

The last words of Bono are: “Thank you. Thank you so much.” Dude, after that super gigantic climax chiastic mega phrase The power of the people is much stronger than the people in power you just cannot, never ever, ever, ever say anything afterwards. We tend to think that we have to thank our audience. But we don’t. Keep the vibrations in the room. Create those goosebumps. Stop talking and look at them. Rhetorical beauty.

Bono could improve his left hand gestures and body language in general. 90% of the speech Bono neglects his left hand. The left hand touches his bum, looks for emptiness in his pocket, or surrenders to other meaningless gestures. He should use his left hand the same way he uses his right hand – with more meaning.

Another hand gesture, which doesn’t add any non-verbal impact to your speech, is what I call “hand washing”. Paint pictures with your hands on stage; wash your hands in the bathroom.

Finally, Bono could move his head less hectically. He doesn’t look at individuals in his audience, but keeps moving around without focus. These movements disturb the coherence Bono builds with his calm voice. The solution is focus. Focus on individuals like a laser beam. This will improve your poise.

It’s wonderful to see how a global rock star like Bono enters the public speaking arena. He builds all three pillars of rhetoric; that’s why his talk has persuasive power. What can we learn from Bono? A lot, especially on the content side. Tell stories, tell anecdotes, be vulnerable. Then, even poverty can be good news!