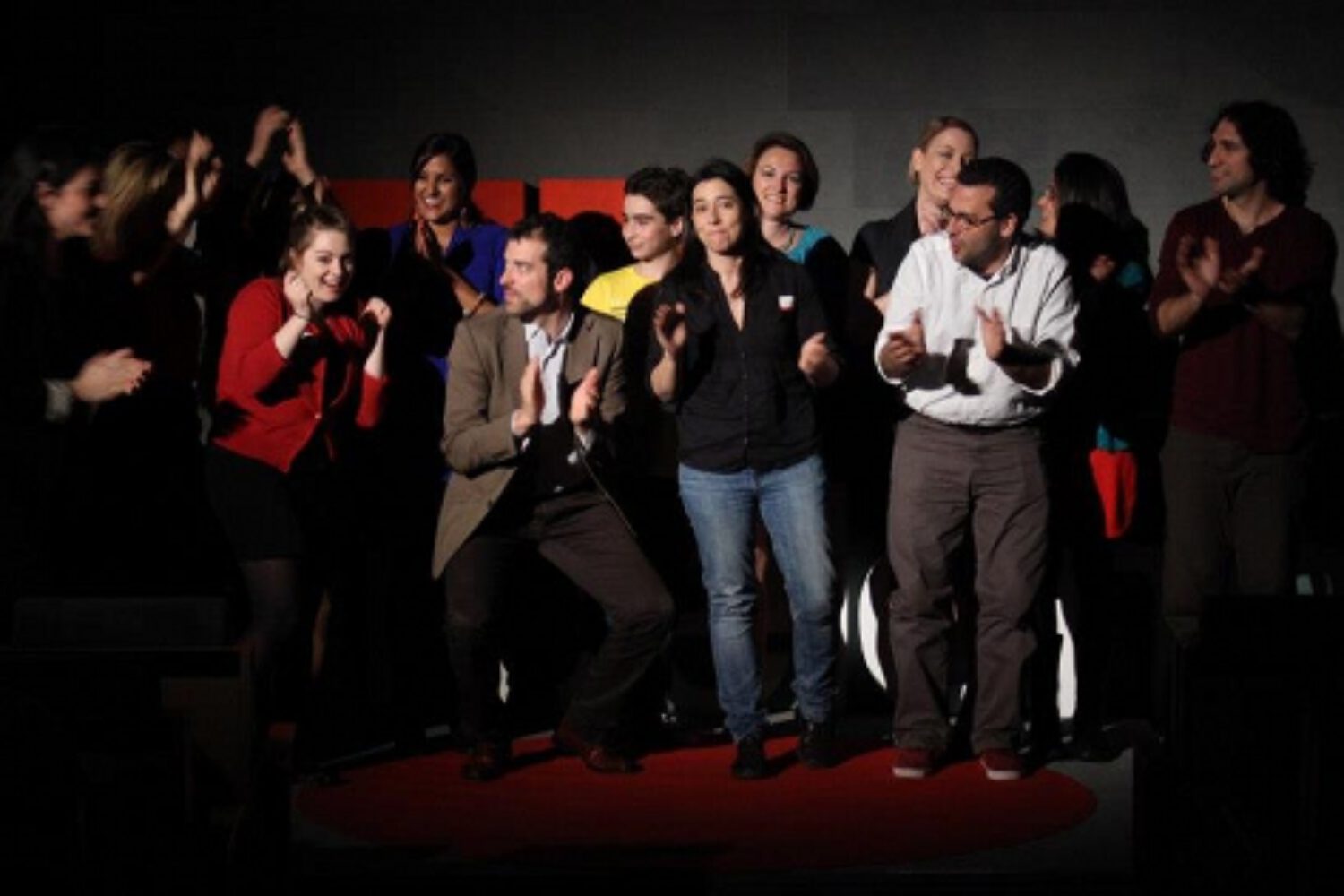 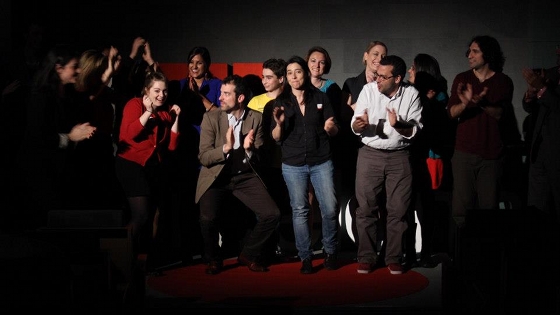 I will never forget those two days in April 2013. This is my tribute to those 13 TEDxBarcelona Change heroes.

Joya means jewel in Spanish. And what a rhetorical jewel she is. In her talk Joya impresses us with her personal stories, her emotional transparency, her young-hearted, but mature ethos. We included a food analogy comparing global decision makers sitting in New York and Geneva with McDonald’s, while local people with local HIV problems need Paella programs. Her final lines calling everyone to action cause goosebumps. What a close! Congratulations, Joya!

Fran is already an experienced public speaker. He did very well in the rehearsals. What we sharpened was his message. Simplicity is king and he makes it simple: cash not food! I asked Fran during a coaching session: When you were younger, did you also think that the poor cannot handle money? He admitted it. I’m very proud of Fran that he included this self-criticism into his TEDx talk. These are the golden moments of rhetoric. When you point a finger at yourself, not at others. That is the moment when you turn into a role model to follow. Congratulations, Fran!

Paula speaks English, but she feels much more comfortable in Spanish. Her decision to use the latter for her TEDx talk is understandable, but sad for those who don’t speak Spanish. Paula is the quiet speaker, the logical thinker, the one who doesn’t need a Hollywood-style delivery to transmit. Paula transmits in a different way – like a radio announcer. Calm, story-driven, deep. We hung on her lips and we got the message: In warmer areas of the world we need vaccines that you can drink and that can resist higher temperatures. Simple message combined with strong, authentic delivery. Congratulations, Paula!

Laughing Our Way to a Better World: Sindre Olav Edland-Gryt

Those Norwegians!! Funny guys. Sindre presented a hallmark viral campaign that turns our cliché-driven thinking upside down. The video clip received the expected laughter – a truly wonderful campaign. I won’t tell you too much, just watch it! Congratulations, Sindre!

Georgina is wonderful person and a warm-hearted speaker. She gained a lot of impact during the rehearsals. It was great to see how she improved her gestures within only 24 hours. What Georgina does brilliantly in her talk is, she uses one person, one example, one case to get her message through. Less is more! For me, her highlight comes when she yells, He decided to rock the stage! at 4m 41s. Awesome. Congratulations, Georgina!

Quique rocked the TEDxBarcelona Change stage! His self-deprecating humor, his Fall of the Alpha Dog joke featuring Bill Gates, his natural attitude – Quique just rocked! For me as a coach, it was amazing to see how fast he could apply changes and ideas. There’s one point when he speaks about malaria killing an African child every 60 seconds. About one minute later he remarks that, Oh, by the way, another child has died. We added this to his script and Quique could handle it without problems. He rocked the stage from beginning to end! Congratulations, Quique!

We all have our styles. In my seminars I always say that no one should strive for becoming Steve Jobs or Barack Obama or Oprah Winfrey on stage. We all work on our own style and some of us have a unique style already. Jordi is certainly one of them. Playful, cheeky, enthusiastic, loud, smiling – great ingredients to succeed in the public speaking arena. He uses visual aids, he is engaging, he connects with the audience. A great performance. Congratulations, Jordi!

Kate from San Francisco… what a great, humble lady she is!  This must’ve been her scariest 24 hours of her life! For 24 hours Kate was trying to hide from stage-fright, but her inner voice found her everywhere she tried to hide. Until… her real TEDx stage performance. I’m so so proud of Kate. She worked so hard on that speech and herself. She probably deserves the biggest applause. Congratulations, Kate!

Jordi flew in from Nairobi where he works for the UN. A super likable character from Barcelona – Jordi was my most challenging case. I wanted him to smile more, to use more vocal variety, to be more energetic! Off stage he does… much more. On stage he can do… much more. Yet, his message of cooperation in developing countries landed on robust ground. I advised Jordi to join Toastmasters in Nairobi to boost his delivery. He promised he would. Delivery aside, Jordi did step into the arena with the lions. Others don’t! Congratulations, Jordi!

I preach five ways to start a speech. Lluis used the polemic first sentence pattern: I’m the bad guy! One sentence and everyone in the audience was listening. Fantastic opening! With his injured knees Lluis couldn’t move on stage. But was it necessary? In his talk he is clear, to the point, he uses a 5-pillar structure, he conveys ethos, and he is 100% authentic. If I were a social entrepreneur in the health sector, I would talk to Lluis straight away. No doubt about that. Congratulations, Lluis!

Miguel gave a surprising, eye-opening, intriguing talk. Fighting malaria with video games? He shows how it works. I love Miguel’s natural style. He comes across very authentic. He is the same person on and off stage –  a rare species, at least without a lot of training. Congratulations, Miguel!

The Beauty of Collaboration: Juliane Zielonka

The biggest change by far – from the moment she stepped into the room to the moment she gave her talk. Juliane has such a great, personal story to tell. She’s totally enthusiastic about changing the status quo of the doctor-patient-relationship. But she arrived in Barcelona with a fully written speech with small letters on three DIN A4 pages. She wanted to read it out loud. Hey, wait just a minute – this is TEDx, no way! The transformation began and more and more Juliane fought back her inner voice. In the end, she triumphed speaking freely without notes, with energy, with smile, with conviction. What a change! All of us – fellow speakers, organizers – we were just blown away by her performance! And the Sherlock Holmes-Dr. Watson analogy? Wow! Congratulations, Juliane!

14 years old. Genius in terms of IQ. TEDx speaker. Humble. We’ll hear more of Berenguer in the future. When he heard me saying that we needed water next to the stage for the speakers he ran away and came back with 15 liters of water. The elevated IQ of Berenguer became evident when I told him to use the drainpipe at the end of his talk to connect the closing with the opening. I told him to use some color like green and he asked me, Why green? I responded that it didn’t matter, just any color to make the closing more intriguing. Berenguer ends his speech saying that the soul is purple. This guy is one of a kind. Congratulations, Berenguer!

Thank you, Aurelie, Pelin, Johanna and all you other social gangsters who leave a mark behind for letting me be part of this great project. Thanks to you I received my call. I will support social entrepreneurs from now on – wherever, whenever I can!