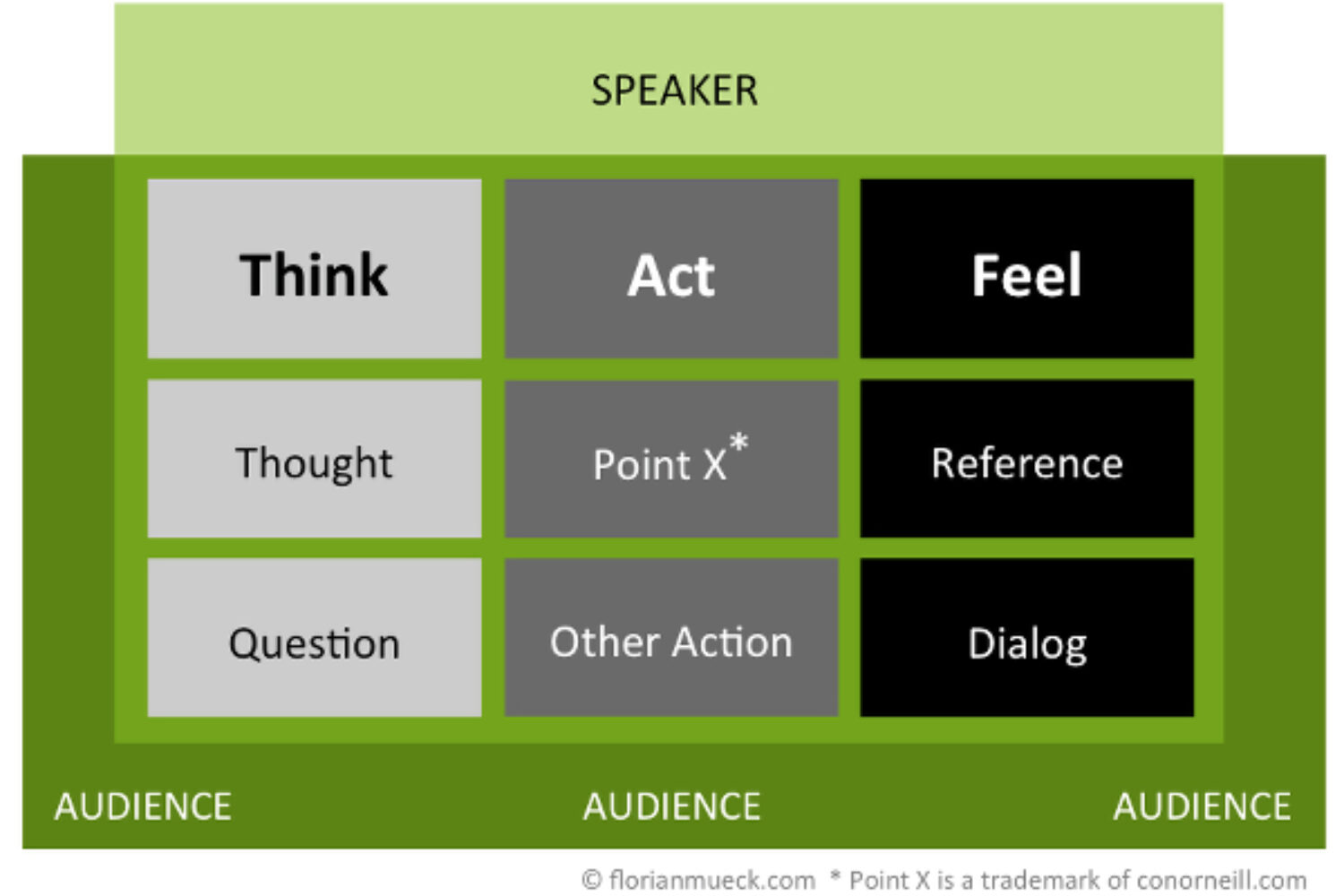 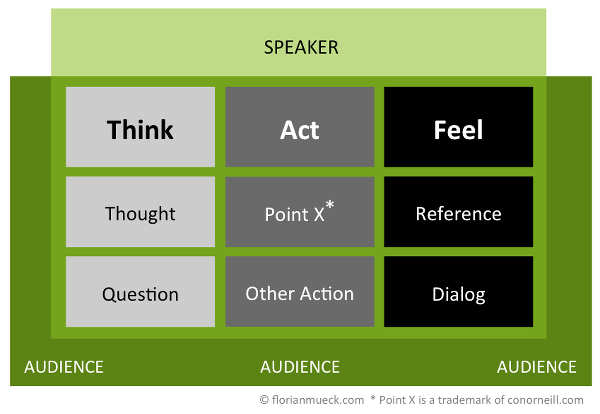 At one point of my public speaking seminars I always ask one simple question.

Who is king – the sales guy or the client?

The client, they respond.

I continue. And who’s the client – the audience or the speaker?

The audience, they respond.

Exactly! Now – who is king – the speaker or the audience?

We talk about our service, our product, our approach, our strategy, our vision, our business plan, our solution. We, we, we, we, we, … It sounds like a Nintendo Christmas ad.

The key that opens the gate for your audience to feel heard, respected and acknowledged is a key of empathy. That key is called interaction.

Apart from making your audience feel being a part of your speech, interaction also keeps the level of attention in your audience high. You have multiple ways to interact with your audience and make them think, act and feel.

As a speaker you can trigger thoughts in the minds of your audience. But not only that; you can canalize the way they think. You can drag them all onto the same page of thought. On that page you’re fully connected with your audience. I differentiate between making them think and asking questions, which require an instant answer hence thought.

For instance, you could start a paragraph of your speech saying, Think about…

Once I gave an inspirational speech at Heureka – an online conference in Berlin. At one point of the speech I said,

During the cocktail party after the conference some guy approached me with a smile and yelled at me, Norway!

Our road trip… The Norwegian Fjords – the best time of my life!

You see, on that day, in that room, 548 people relived the best road trips of their lives.

Do not picture this or that is another thought trigger.

My Toastmasters friend Francisco from Brazil gave a speech at a Mallorca conference. At one point he told us, Whatever you do… Whatever you do, do not picture me naked!

Of course, in our minds we all saw this kind, naked Brazilian in front of us. On top, Francisco harvested a great laugh.

Then, there are speech moments when you are Hannibal Lecter. You just sense what your audience thinks or feels. When you start a paragraph saying, I know what you feel…  – that’s a golden moment of public speaking. More empathy? More connection? Impossible.

One thing you should never do as a speaker is to assume what your audience thinks. Speakers often say, Now you might be guessing…  Or, You might be thinking now…

Benny Hill, the English comedian, said that, If you ASSUME, you make an ASS of U and ME.

The solution to the assumption problem has its roots in the second thought trigger – the question.

Did you know that our human brain is incapable of not answering a question?

Have you been to Greece? Whether you’ve been to Greece or not – you see the deep blue Mediterranean Sea and those picturesque white buildings plugged into the mountainous cliff lines.

I don’t know about you, but a sentence that starts with I don’t know cannot be the most persuasive phrase. If you don’t know it, don’t say it. Plus, indirect questions may let your audience drift away mentally. Only a direct question is instant glue for their thoughts.

Two, avoid open questions. Open questions invite the loud and noisy alpha dogs in your audience to attack. What do you think about the economical situation in Greece? A question like this one and you’re dead. Alpha dogs love to leave scratches on your ethos pillar (Ethos = the speaker’s credibility and authority). They’ll yell something back at you. The moment you enter the discussion you’re lost. Closed questions, which can only be answered by yes or no, are the safe path.

And why is the question the solution to the assumption problem? Simple. Any assumption like, We all love shopping, is always wrong. Some people in your audience hate shopping. You better take the risk-free path of asking, Who of you loves shopping?

Rhetoric is the art of persuasion and, as a consequence, moving people to action. In order to move people to action more effectively, you need to make them perform a symbolic act.

In his 1984 business book classic on persuasion and marketing, Influence: The Psychology of Persuasion, Dr. Robert B. Cialdini comes to the conclusion that people who commit, orally or in writing, to an idea or goal, are more likely to honor that commitment because of establishing that idea or goal as being congruent with their self-image.

This means that a symbolic act performed by your audience increases their level of commitment. Conor Neill, Professor of Persuasive Communication at IESE Business School, calls it Point X.

At a practical communication session of the Global Executive MBA program of IESE I experienced one of the most memorable Point Xs ever. One of the participants wanted to persuade us to reduce the level of salt in our daily diet. Before his speech he put a regular bouillon cube in front of everyone. When closing his speech he made us open the cubes, break them into halves and then eat one half of the bouillon cube. I’ll never forget that horrible taste of pure salt. Now – every time I’m about to use one of those cubes I think back to that speech. Most of the times I avoid using them. What a powerful Point X!

Point X is a specific action, but you can also make your audience randomly act throughout your speech. Based on my experience, audience action is the most powerful retriever of audience attention.

Do you know the golden rule of public speaking? There’s no rule. You set the rules. Imagine you have to give a 45-minute talk at a university.

45 minutes is an eternity, especially for a non-professional public speaker! After eight seconds your audience starts to think about their upcoming dinner party, the diapers they still have to buy or that they should’ve gone to the bathroom during the break. After 1.5 minutes they’re completely gone. After seven minutes they last man standing falls asleep, and even the most exciting TED talk doesn’t last longer than 18 minutes – for a good reason. 45 minutes is an eternity!

Once the CTO of an Internet holding company based in Berlin sent me an email asking for advice. He had to give such a 45-minute talk. I told him to include two to three-minute minute breaks after each of the three main content blocks. In those mini breaks his audience could reflect in teams of two on the content they’d just heard. It was a great success. The CTO told me afterwards that audience attention was back to 100% after each break.

You can make them feel acknowledged. In my charisma seminars one speech topic is called, How do I motivate my colleagues? The one factor, which is mentioned the most, is public acknowledgment. In terms of motivation, public acknowledgment beats any paycheck. As a speaker you have two ways to benefit from this concept.

First, you can make references to other speakers or people from the audience.

References to others make them feel good. You put them on the spot, and by doing so you acknowledge them in some way or the other. References also show that you listen to others. References are a great indicator of empathy.

While references to others are an indirect form of acknowledging them, one-to-one dialogs are even more direct.

I love one-to-one dialogs. You hardly ever hear them in public speeches. For me, they build the peak of audience connection. Your audience is an entity. When you single out one of them, they all feel involved.

Start to interact with your audience in your next speech or presentation. They will love you much more as a speaker because finally someone has understood who’s the real protagonist. Finally someone knows who is king. It’s not you.