The key element of this speech structuring model is the drainpipe which connects the closing of a speech with its opening. 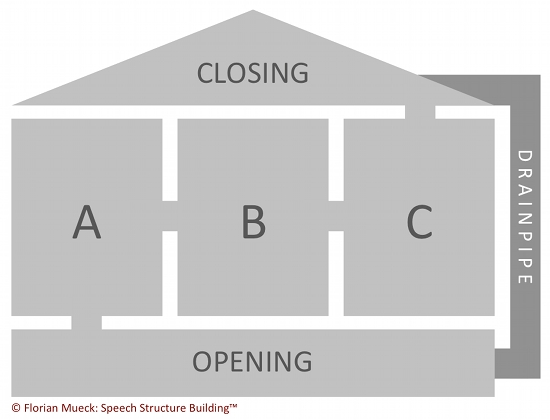 In one my public speaking seminars Szymon from Krakow spoke about his biggest fears in life. He held a balloon in his left hand. He moved gently towards one of his colleagues. Then – BOOM! The balloon burst right in front of her face. Szymon yelled, What did you see in her face? Fear!, shouted another colleague. Szymon replied: Exactly… fear!

What a great opening.

But – when his speech came to an end, Szymon missed out the great opportunity to use the drainpipe. His message was that we should change the perception towards our fears. That fears only existed in our heads.

In the feedback round after Szymon’s speech I suggested that he could have picked up another balloon and, without bursting it, pass it to the same colleague saying, Change your perception!

That balloon would have made a magnificent drainpipe.

In another occasion my friend and co-trainer Tobias Rodrigues used a wonderful drainpipe based on a chiasmus. It was his ice breaker speech at our Toastmasters club in Barcelona.

Tobias opened his speech with the words, My life in your hands… He enforced the phrase by using hand gestures – from touching his chest to reaching out to his audience.

Tobias ended his speech saying, Your hands in my life… While saying this he used reversed hand gestures.

It’s the drainpipe which makes your speech round. And – as you could see in those two examples, there is no limit to your creativity when it comes to drainpipes.

The question is: What is your drainpipe in your next speech?